Pericytes are a type of brain cell you’ve probably never heard of. But according to new research, these hard-working cells may be your brain’s most important defense against dementia.

Your brain, as you may know, is composed of grey matter and white matter. Grey matter mostly consists of the central regions, or “cell bodies”, of neurons, forming the outer layer of the brain. White matter is made of axons, which are long extensions that neurons use to send electrochemical signals to each other, kind of like telephone wires. Leaks or blockages of the brain’s arteries, known as cerebral small vessel disease (CSVD), can damage the surrounding white matter. Research has shown that CSVD contributes to 50% of all dementia cases, including Alzheimer’s disease. 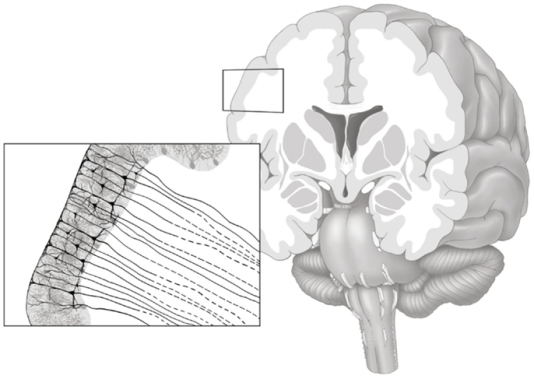 Neuronal cell bodies form the grey matter on the outside of the brain, while the inner white matter layers are made of long extensions called axons. Image Source

That brings us to the key player in this story: pericytes. These humble cells aren’t a part of our common vocabulary, but that doesn’t make them unimportant. Pericytes surround the blood vessels in your brain, maintaining the arterial wall and controlling the rate of blood flow. They also serve as “gatekeepers” by helping to regulate what can cross the blood-brain barrier. And now, thanks to research published this week in Nature Medicine, we now know of a new function for these little-known pericytes: protecting brain’s white matter from damage.

The researchers in this study first looked at postmortem brain tissues from 31 different people. They saw that the people with Alzheimer’s disease had 50% fewer pericyes than the healthy controls. As a result, the Alzheimer’s brains contained three times as much fibrinogen as the healthy brains. Fibrinogen is a protein found in the blood plasma, and its presence in the brain indicates the existence of capillary leaks. In other words, it seemed that the Alzheimer’s patients had leaky blood vessels in their brains, possibly as a result of having fewer pericytes. These leaks caused the Alzheimer’s brains to have substantially more white matter damage than the healthy brains.

Pericytes, shown here in green, surround blood vessels in the brain and help to guard against damage. Image Source

To understand the mechanisms by which this might occur, the researchers then turned to experiments on laboratory animals. They utilized mice that had a mutation causing them to develop fewer pericytes than normal. Sure enough, these mice soon developed leaky capillaries, as evidenced by high levels of fibrinogen in their brains. The levels of fibrinogen progressively worsened with age. The mutant mice also had 30-40% fewer fibers within the white matter than non-mutant counterparts by the time they were 36-48 weeks old (which is middle-aged for a mouse). These results showed that the loss of pericytes was sufficient to cause leaks in the blood-brain barrier and white matter damage.

Next, the researchers analyzed whether this white matter damage had any functional effects on the mice’s behavior. They found that the mutant mice that were deficient for pericytes performed well at a young age, but began to show impairments on memory tests as they grew older. The older mice also had significant cell death in the hippocampus, the part of the brain responsible for long-term memory formation.

The final experiment was to determine whether treating the mice with capillary-strengthening drugs could reverse the defects caused by a lack of pericytes. Their drug of choice was ancrod, a substance derived from the venom of the Malayan pit viper. Ancrod by itself is not poisonous, and it has the interesting property of being able to prevent leaks in the brain’s capillaries. When the mutant mice were treated with ancrod, their blood-brain barriers were substantially less leaky and they also had less white matter damage.

Ancrod, derived from the venom of the Malayan pit viper, could one day be used to fortify leaky brain capillaries and prevent the development of dementia. Image Source

The results of this study are exiting, because they suggest that dysfunctional pericytes could be one of the earliest factors leading to the development of Alzheimer’s disease. Furthermore, the white matter damage that contributes to 50% of all dementias could possibly be preventing by strengthening the integrity of our brain capillaries. In 2009, clinical trials using ancrod to repair brain capillary damage in ischemic stroke patients were terminated due to ineffectiveness of the drug. However, this study shows that it might be beneficial for dementia as well, and will need to be investigated in future trials.