A small study suggests that saliva tests for amyloid-beta could be a useful method for diagnosing Alzheimer’s disease.

As we discussed in last week’s article, Alzheimer’s disease is notoriously difficult to diagnose, particularly in its early stages. Some estimates suggest that up to half of all Alzheimer’s diagnoses are incorrect. Currently-available tests for Alzheimer’s are often expensive and invasive, and in many cases they still can’t offer a completely accurate diagnosis.

In a recent study published in BMC Neurology, researchers investigated whether saliva could be used to detect the hallmarks of Alzheimer’s disease. The test quantifies levels of amyloid-beta, a toxic protein that accumulates in the brains of Alzheimer’s disease patients. Since detecting amyloid-beta inside the brain can be difficult, its levels in the saliva could be a useful proxy to aid in diagnosis. 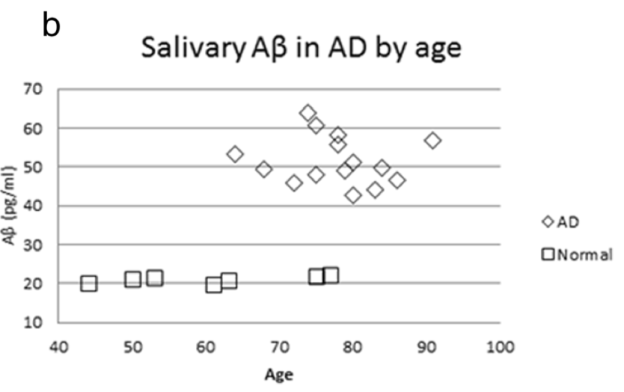 The results of this study suggest that the levels of amyloid-beta in the saliva could be a cheap and easy method for improving the accuracy of Alzheimer’s disease diagnoses. Since the current diagnostic methods require a spinal tap or blood sample, a saliva test could help encourage people to get tested for Alzheimer’s, considering an estimated 3-10% of individuals have a phobia of needles.

Due to the small sample size, this study needs to be repeated and expanded before we can draw broader conclusions. However, the preliminary results are encouraging and help to corroborate previous studies that have shown similar accuracy for these saliva tests. Perhaps in the future, diagnosing Alzheimer’s disease will be as simple as spitting into a tube.