According to new research, anosognosia (“lack of self awareness”) may be used to predict whether patients with mild cognitive impairment will progress to Alzheimer’s disease.

Anosognosia describes the inability to recognize that one is experiencing a mental illness. It is most well-known in schizophrenia, where patients frequently cannot acknowledge that their delusions are the result of a mental condition and not based in reality. However, anosognosia can also occur with dementias, such as Alzheimer’s disease. In later stages of the disease, people with Alzheimer’s may lose their ability to recognize their own cognitive deficits.

In a paper published this week in Neurology, researchers from McGill University wanted to assess whether anosognosia could be used to predict whether patients with mild cognitive impairment would later progress to Alzheimer’s disease. Mild cognitive impairment (MCI) is a condition that affects nearly 20% of adults over 65. It is characterized by memory problems that are noticeable but not severe enough to interfere with daily life. Some people with MCI later progress to Alzheimer’s disease, while others do not, and we currently do not have a reliable method to predict whether a person with MCI will develop Alzheimer’s.

The study included a total of 468 MCI patients recruited through the Alzheimer’s Disease Neuroimaging Initiative, a large consortium of researchers searching for reliable ways to predict and diagnose Alzheimer’s. The researchers looked at the subjects’ cognitive self-assessment and compared it to their spouse or caregiver’s assessment of the patient’s cognition. Individuals who rated their own cognition substantially higher than what their caregiver rated them were categorized as anosognosic.

The researchers then administered spinal taps on each subject. They found that the anosognosic patients had higher levels of the toxic tau protein in their cerebrospinal fluid. These patients also had higher levels of amyloid-beta in their brains. Additionally, PET scans revealed that the patients lacking self-awareness had reduced levels of activity in a part of their brains called the default mode network. The default mode network is a group of brain structures that become less active when you’re focusing on a particular task, and more active when you’re daydreaming. Studies have found that the default mode network is among the first parts of the brain to degenerate in Alzheimer’s disease, but its specific role in the disease still remains unclear. 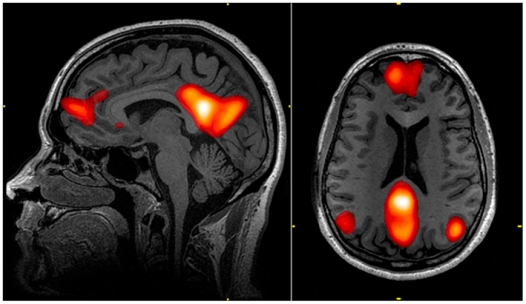 This fMRI image shows the brain structures that make up the default mode network. Image Source

The final phase of the study involved a follow-up examination two years after the initial assessment. The researchers found that 28% the subjects with anosognosia progressed to Alzheimer’s disease, compared to only 12% of those with intact self-awareness. This shows that assessing MCI patients’ awareness to their own cognition could be a useful tool for predicting whether they will later develop Alzheimer’s disease. The study also suggests that the default mode network might be important for our ability to recognize our own mental status.