This week’s article is a guest post by Dr. Nafisa Jadavji, a research associate and lecturer at Carleton University and the University of Ottawa. To submit your own guest post to AlzScience, please contact us. 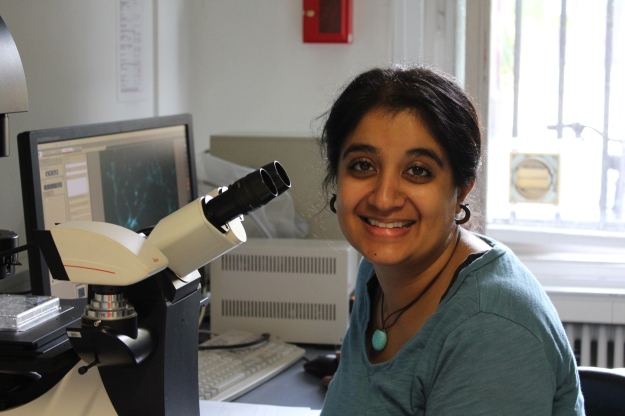 Vascular cognitive impairment (VCI) is the second leading cause of dementia after Alzheimer’s disease.  VCI is the result of reduced blood flow to the brain, however, the pathology is not well understood. Reduced blood flow ben be a result of age and health (e.g. high cholesterol). The clinical presentation of VCI varies, most the patients have some degree of cognitive decline. There are currently no treatments for VCI since the actual pathology remains unknown.

Nutrition is a risk factor for VCI, specifically high levels of homocysteine. High levels of homocysteine can be reduced by B-vitamins, like folates or folic acid. Folates are the natural occurring form of the vitamin, these are often found in food such as green leafy vegetables or liver. Whereas folic acid is the chemically synthesized form that is often taken in supplemental form.

My research program focuses on how nutrition affects the brain, specifically how folates affect neurodegeneration.

Using a mouse model of VCI we have reported that deficiencies in folates, either dietary or genetic, affect the onset and progression of VCI. Using the Morris water maze task, we report that mice with VCI and folate deficiency performed significantly worse compared to controls. We assessed changes in the brain using MRI and interestingly found that folate deficiency changed the vasculature in the brain of mice with VCI. Because of either a genetic or dietary folate deficiency, all the mice had increased levels of homocysteine. However, we did not observe any significant association between elevated levels of homocysteine and behavioral impairment or changes in the brain tissue of VCI affected mice.

In the Morris water maze, a mouse is placed in a pool and must swim to find a hidden platform. The mouse’s memory is measured based on how long it takes to find the platform after it’s placed in the pool a second time. Image source

Our results suggest that it is not elevated levels of homocysteine making the brain more vulnerable to damage, but the deficiency in folates, either dietary or genetic that changes the brain. In the cell, folates are involved in DNA synthesis and repair as well as methylation. These are vital functions for normal cell function. Therefore, reduced levels of folate may be changing the cells in the brain and making them more vulnerable to any types of damage. I would like to suggest that high levels of homocysteine may just be out put measurement of some sort of deficiency (e.g. reduced dietary intake of folates). Several studies using brain cells that are grown in petri dishes have reported that extremely high levels of homocysteine need to be added to cells to cause damage. These levels are usually not observed in humans.

In terms of future directions, more research is required to understand how deficiencies in folates, homocysteine and other nutrients that reduce levels of homocysteine like choline change cells in the brain throughout life and how these changes are related to neurodegeneration.

For more information about my research please visit my personal website.

3 thoughts on “Homocysteine and Dementia: Impact of Nutrition on Neurodegeneration”