As we age, a multitude of changes occur in our bodies at the genetic level. A gene is essentially just an instruction manual for building a particular protein. When the gene is activated, it’s like the book is wide open, allowing the cellular machinery to access the instructions and build the encoded protein. This is called “gene expression.” Genes can also be inactivated, like sealing a book shut so that the instructions can’t be accessed. When this happens, the protein that’s encoded by the gene cannot be synthesized.

This system of modifiable gene expression is necessary for complex multicellular organisms like ourselves to function. It’s what makes a heart cell different from a lung cell: even though their DNA sequence is the same, different genes are turned on and off in each type of cell. While the sequence of our DNA (i.e., the words written in all the instruction manuals) generally stays the same throughout our lifetime, a variety of factors can alter the pattern gene expression in individual cells. One of these factors is aging.

An overview of gene expression. DNA is transcribed into an intermediate molecule called RNA, which then is translated into the final protein. Source

In a study published this week in Cell Reports, researchers from the UK examined all the changes in gene expression that occur in our brains during aging. They used a total of 480 post-mortem human brains from individuals aged 16 to 106 and performed a comprehensive analysis of gene expression based on specific regions of the brain. To their surprise, they found that neurons (the primary brain cells that are responsible for our actual “thinking”) had relatively small changes in regional gene expression over time.

In contrast, large changes were observed in non-neuronal brain cells called glia. Glia were once seen as just passive connective tissue, but we now know that they play a variety of important roles in the brain including maintaining the proper environment for neurons, aiding in the speed of neuronal transmissions, and protecting the brain from infection or injury. The glia’s gene expression changes were highly dependent on their region of the brain, with the most prominent shifts being observed in the hippocampus and the substantia nigra, structures associated with Alzheimer’s and Parkinson’s diseases, respectively.

The researchers also found that genes specific to microglia, a type of glial cell that serves as the brain’s primary immune system, had higher gene expression overall in older brains compared to younger brains. In contrast, genes specific to neurons or oligodendrocytes (another type of glia) had lower overall expression in older brains. These changes were accompanied by greater numbers of microglial cells and fewer neurons and oligodendrocytes in specific areas of the brain.

Overall, the changes in glial gene expression were a better predictor of age than changes in neuronal gene expression. This suggests that glia may be the primary driving force behind the process of brain aging, highlighting the importance of future research on these once-ignored cells. 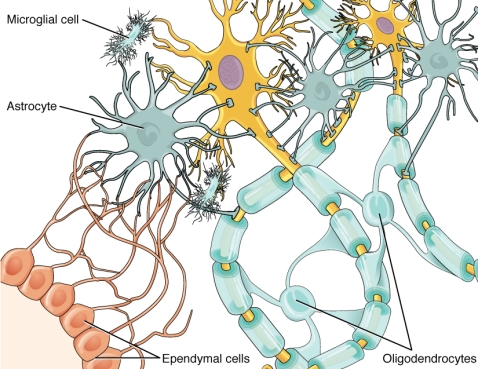 This illustration shows neurons in yellow and various type of glia in teal or red. Glia play many important roles in the brain and are closely linked to aging. Source

A notable limitation of this study is that their calculations were based on levels of RNA rather than protein. RNA is an intermediate molecule between DNA and proteins, but the amount of protein produced from a particular RNA molecular is highly variable. Thus, it’s hard to determine from this study how much the proteins encoded by these genes were actually altered during aging.

Regardless, these results provide strong evidence that glia play a much greater role in aging than previously thought. This reflects a change that has gradually started occurring in the neuroscience community in which some of the focus is shifted from neurons to glia. Perhaps these poorly-understood cells will turn out to be the key to brain aging.